Understanding poker hand rankings are the first essential step when learning poker. Knowing which hands are the best and how to play them will help you win more, beat your opponents, and become a better poker player overall. 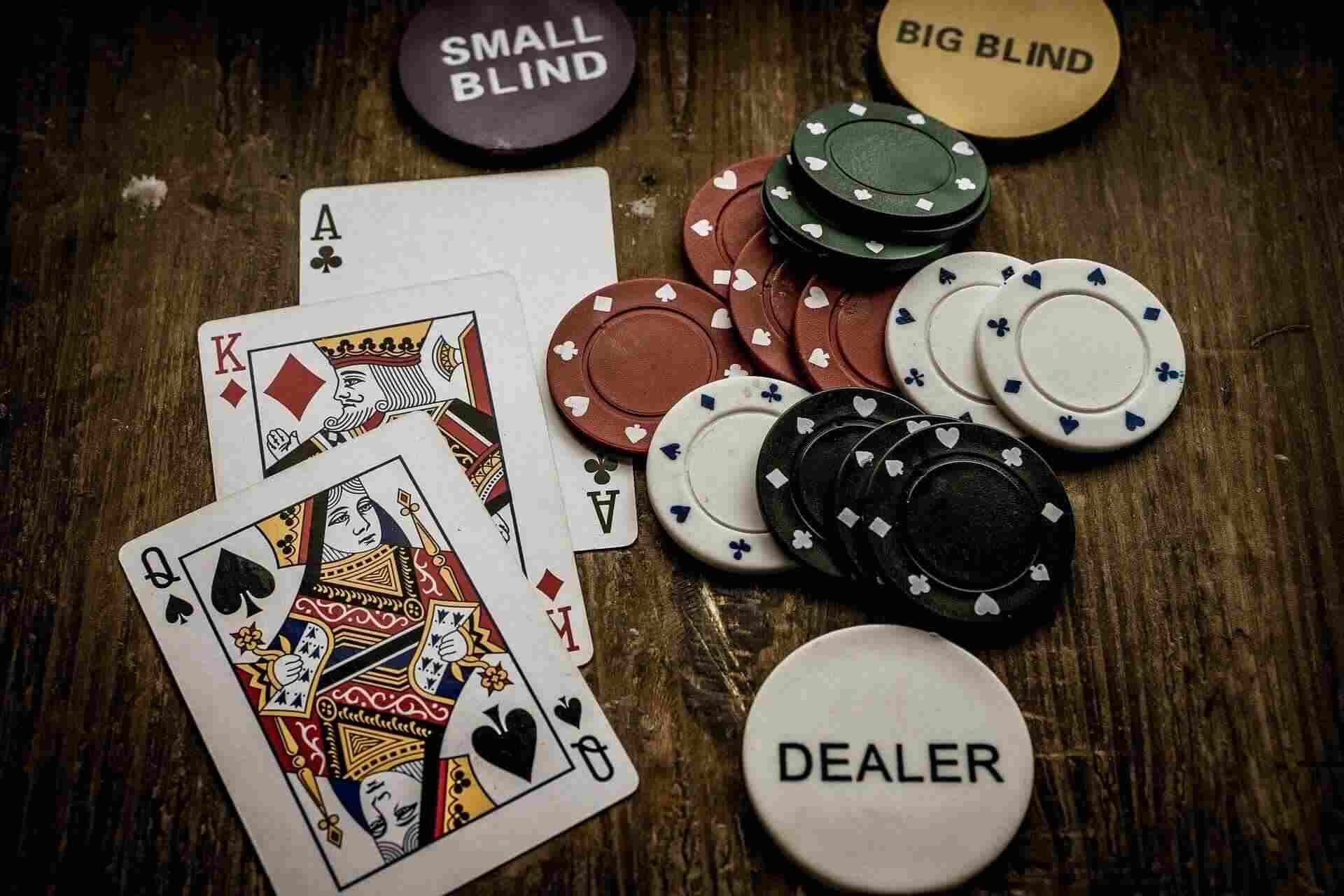 How Are Poker Hands Ranked?

Many people consider poker more of a game of skill rather than a game of chance. Of course, luck plays a big part in it, but having good skills in knowing how and when to act, which hands are worth playing, and how to bet differentiates good poker players from average.

If your goal is to become a winning poker player, you first must understand the gameplay and use a proper poker strategy to win. The first essential step in learning how to play poker is learning the poker hand rankings.

Most poker players have no trouble memorizing poker hand rankings, which allows them to focus on other essential things on the poker table.

A good thing to know is that the poker hand rankings are the same in several poker variants besides Texas Hold’Em, such as Omaha, Seven Card Stud, Five Card Draw, and other poker games.

Poker Hand Rankings – What To Expect

All traditional poker games introduced in the 19th century use the same poker hand rankings. The first poker game that people played was the Five Card Draw. That specific poker game is rarely available in online poker rooms today but still has its fair share of players.

This article will familiarize you with all poker hand rankings going from strongest to weakest. The strength of poker hands corresponds with the likelihood of making such hands.

The Royal Flush is the highest winning poker hand possible. Royal Flush beats any other hand in poker – it’s the ultimate unbeatable hand, consisting of cards from Ace through Ten – all of the same suit. Such a hand is very rare – some poker players can go their entire poker careers and lives without ever making a Royal Flush.

Straight Flush occurs more frequently than Royal Flush, but it’s still rare. It consists of any five consecutive cards of the same suit.

Also, Full House ranks higher than a flush, which might be confusing for newbies, but that is because Full House is more difficult to connect than a flush.

We will now proceed toward the poker hands chart with all hands ranked by their strength from strongest to weakest. 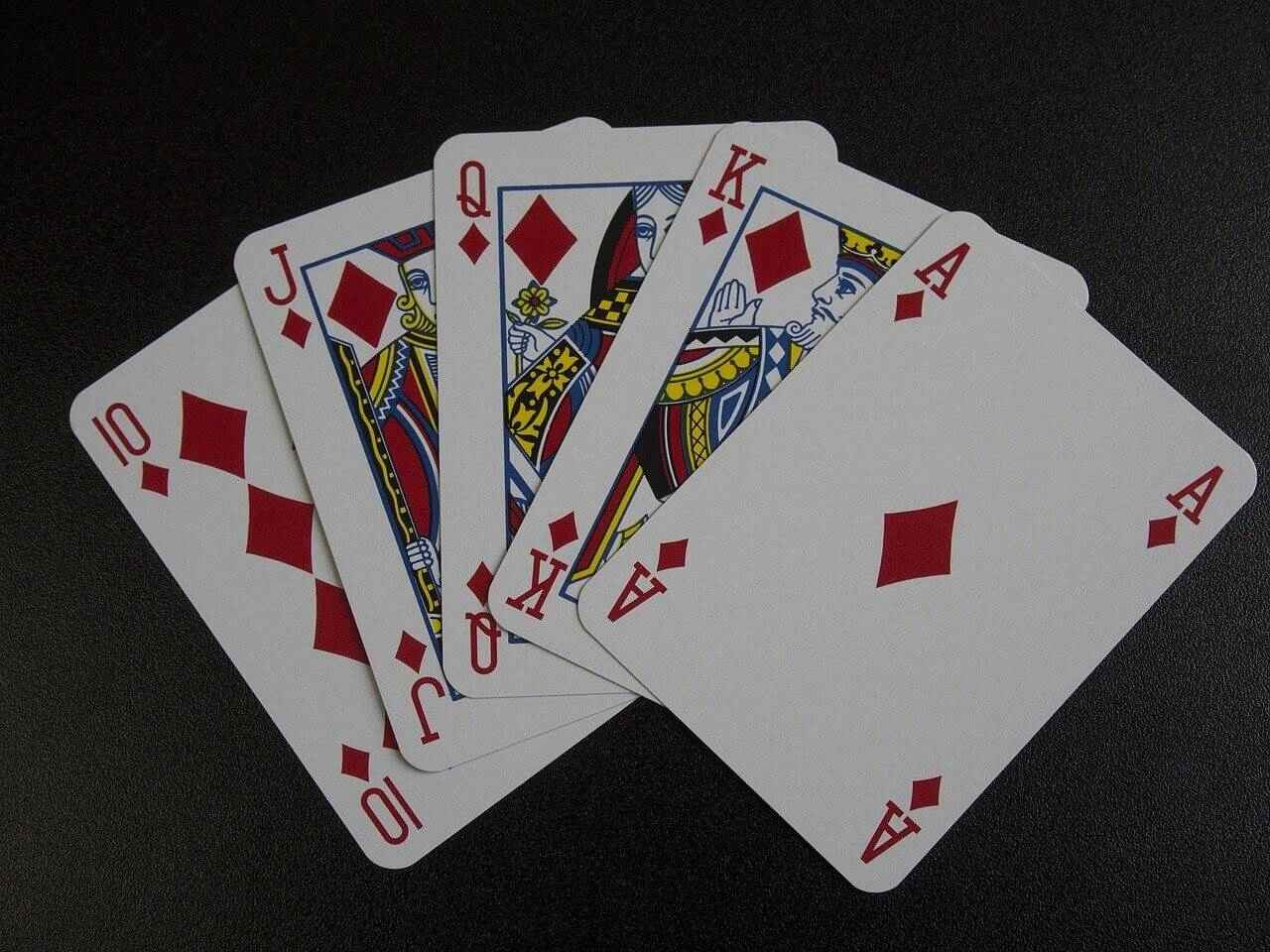 When two or more poker players have the same poker hands, extra cards, i.e. “kickers,” come into play. When this happens, the player that holds the higher kicker card will take down the pot.

The players’ final five cards in hand are:

Both players hold a pair of Jacks, but the winner of the pot is Player B because he has a better kicker card than Player A.

Understanding the Hands in Poker

Beginning poker players often struggle to notice which are the best poker hands. It takes time and practice to understand winning hands, but you can download a free online cheat sheet and learn it as you play.

Remember that the goal in Texas Hold’Em Poker is to make the best combination of five cards. Another thing to know is that you can even win the hand in poker without showing your hole cards if you force your opponents to fold with your betting.

You should not try to bluff someone as a beginner, and bluffing is a poker strategy that you should use only when you have enough experience playing poker.

Royal Flush and Straight Flush beats all other hands in poker, including Four-of-a-Kind, Full House, Three-of-a-Kind, etc. However, in poker, it is possible to beat someone even with the weakest possible hand – a High Card, if you make them fold before the showdown.

Beginning players should take note that the likelihood of winning the hand decreases if the pot involves multiple players. If there are multiple players involved in the pot, the chances are high that some players hold a “monster hand.”

Monster hands in poker are the best starting combinations. Hole cards such as A-A, K-K, A-K, Q-Q are examples of monster hands. 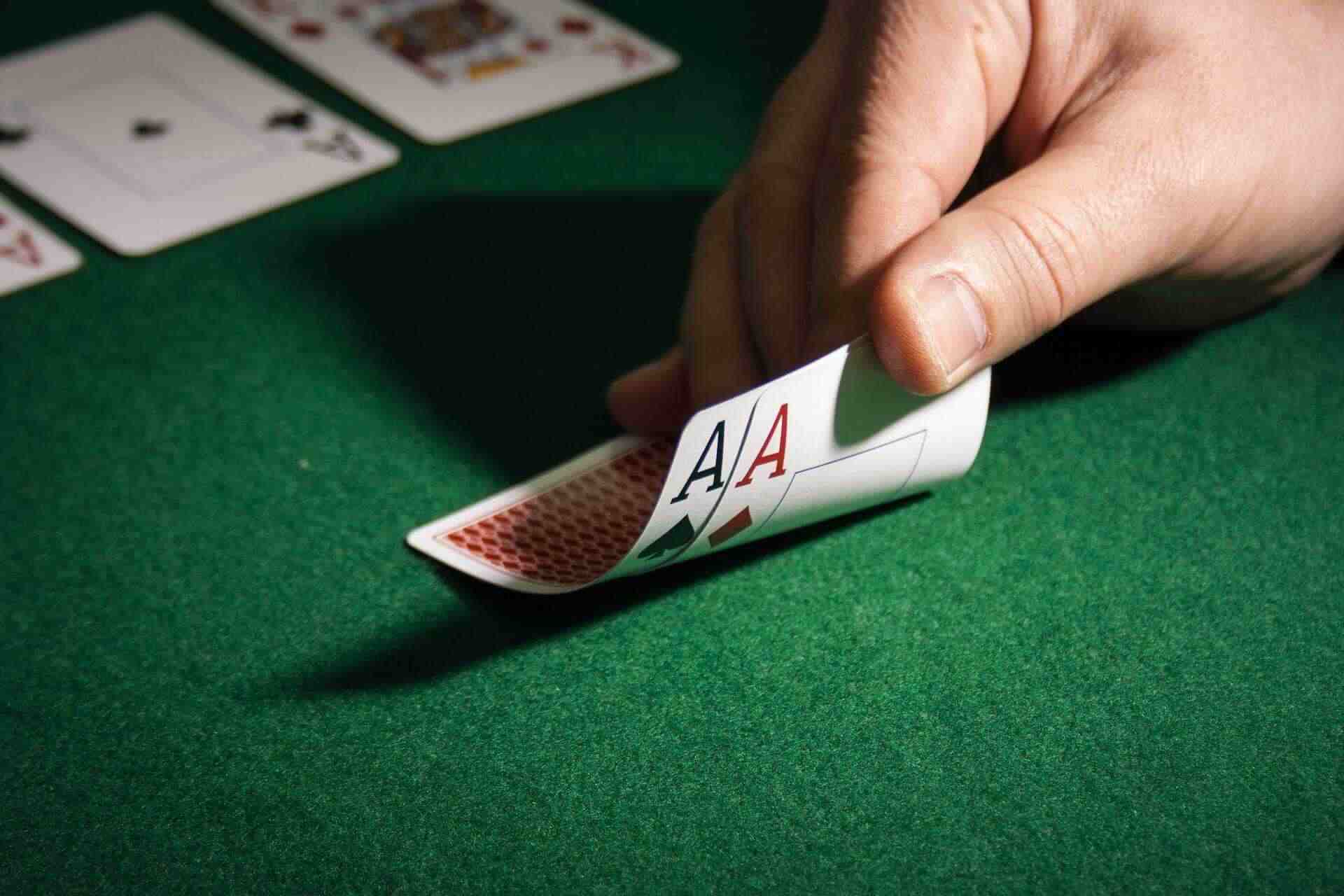 Which Are the Best Starting Hands in Texas Hold’Em Poker?

The following are the Top-10 Starting hands you can get in Texas Hold’Em Poker:

When playing poker, these are the best hands you can start with, so the advice is to play them aggressively. These hands give you the highest starting chances of winning, but they do not guarantee a win. If you play them slowly or if there are many people in the pot, your winning chances decrease.

Is Flush a Better Hand Than Straight?

The short and correct answer is yes. Many new poker players have misconceptions about specific poker hand rankings. They make a mistake believing that Straight is better than Flush, but that is not true. Flush is a stronger hand because it’s harder to make than straight. You are statistically more likely to get a Straight in poker than a Flush.

Sometimes straights are more challenging to notice when combining hole cards and community cards, which can bring an extra value. Often, players will fail to see a straight coming on the river because noticing cards that are not all the same suit is more complicated.

If you need a quick and easy way to remember, think of the fact that Suits are higher and better than Sequences, or use a cheat sheet before you learn to notice with experience. 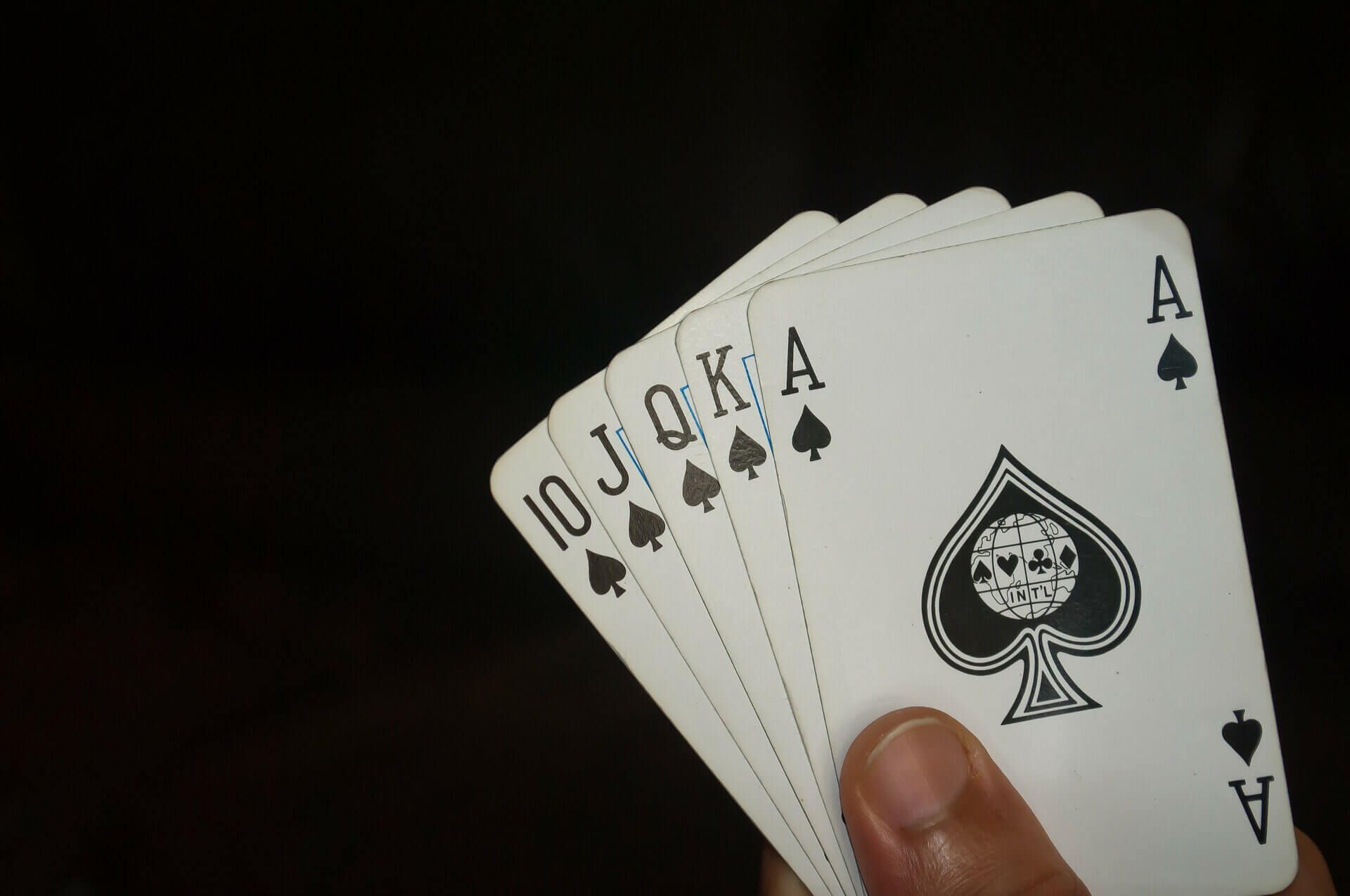 Should I Ever Fold Monster Hands such as Straight Flush or Four-of-a-kind?

No, you should not. Folding a Straight Flush, Four-of-a-Kind, or even Full House is not an advisable play. If you are a beginning poker player, never fold those poker hands. Just be brave and put your money in the pot. Even the most experienced poker professionals never fold such hands except in extremely rare situations.

Some online poker websites and live casinos even offer so-called Bad Beat Jackpots to poker players if their monster hands get cracked in specific tournaments or cash games. Therefore, play such hands aggressively and hope for the best.

Is Using Both Hole Cards Necessary in Texas Hold’Em Poker?

No, it is not. The main goal is to make the best possible combination of five cards, which sometimes may require using just one of your hole cards.

For example, if the poker board shows four hearts, and you have a King of Hearts and a King of Spades, you will use the King of Hearts only to make your King-high Flush – you will not use the other card in hand at all.

Will I Ever Get a Royal Flush Playing Poker?

It’s possible but improbable. Royal flushes happen approximately once in every 31,940 poker hands, but even that is not guaranteed. Do not expect to receive such a hand and beat another straight flush like they usually show in gambling movies. Some poker professionals even go their entire lives without ever hitting a royal flush. 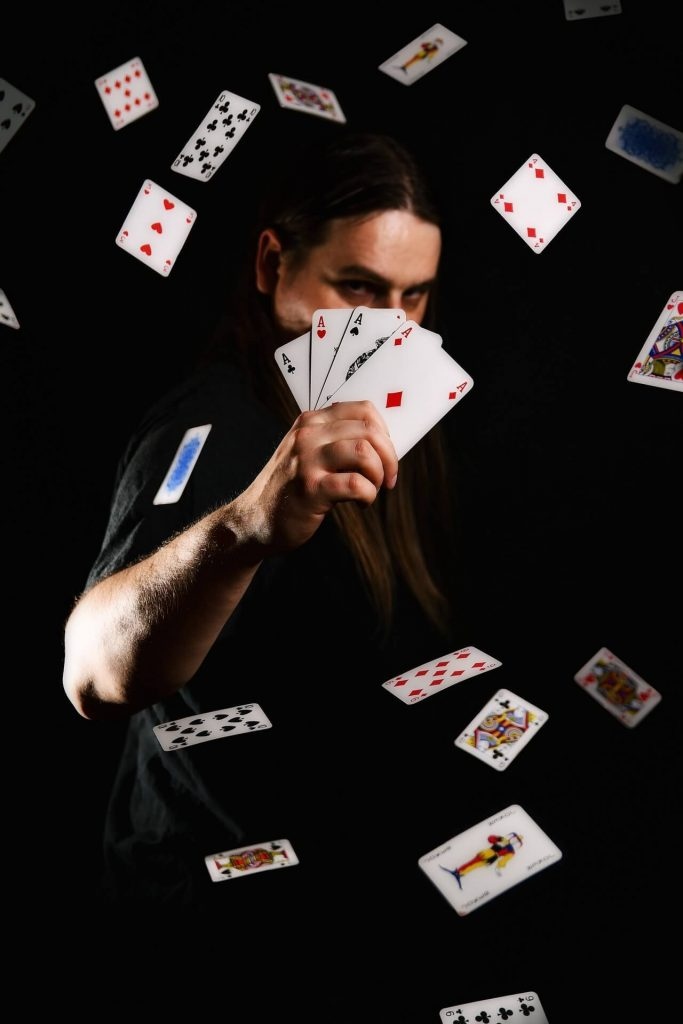 Do Poker Players Need to Memorize the Poker Cheat Sheet?

Memorizing poker hand rankings is unnecessary, but it will likely help beginning poker players. If you are starting your poker adventure now, you could download and print a poker cheat sheet to help you easily remember what the best course of action in a particular situation is. It would probably be best to learn the list of poker hands well before learning more advanced poker strategies.

Of course, there are some essential things that you should surely memorize regarding poker hand rankings. They are the following:

Probability and Value of Poker Hands

Since poker is a numbers game, many wonder about poker hands probability. As mentioned in this article, some players may go their entire poker careers without getting the highest winning hand.

Calculating the poker hands probability is not that difficult. Since we know that there are 52 cards in play and 2,598,960 possible poker combinations, making the calculation is easy, you can do that by dividing the number of possibilities to create a specific poker hand by the number of poker hands.

When it comes to the value of poker hands, they either have absolute or relative value. Of course, the poker hand rankings always remain the same, but sometimes some poker circumstances may make a good hand less valuable and a weaker hand more valuable.

For example, you might be holding a Two-Pair in Texas Hold’Em, which initially looks pretty strong. But if your opponents bet big on every street, it is very much possible they have a Straight or Flush, which makes your solid Two-Pair hand look not so good.

Another final thing to remember is that all of the advice and rules in this guide only apply to Texas Hold’Em Poker, the most popular “high card” game. Lowball games like 2-7 Single Draw, 2-7 Triple Draw, and Razz have different poker hand rankings, where the lowest cards are worth the most.

Online Casinos For Players To Practice Their Poker Skills

There are many online casinos and poker rooms for players to practice poker and perfect their skills. We at GuruCasinoBonus are examining different casinos each month and we recommend you explore and check some of the following at the moment:

What is the ultimate winning hand in poker?

Royal Flush is the best winning hand - made of A-K-Q-J-10 in the same suit.

Is there a highest poker suit?

No, there is no suit labelled as the highest in poker. All suits are ranked equally.

How many poker hands exist?

There are a total of ten possible poker hands, with Royal Flush being the most valuable and High Card being the least valuable.

What will happen if there are two identical poker hands?

If there are two same poker hands, the winner gets decided by who has a higher kicker-card. The kicker card is the highest value card outside of the made hand.

Video Poker Strategy: How to Tip The Odds in Your Favor

In video poker games, you are not just relying purely on luck. You can improve your odds of winning if […]

How to Play Craps – Beginner’s Guide

Craps may look like a complex casino game to some, but it is a straightforward game to play. It’s as […]